This week I don't have anything finished but I have been working on several things.  I'm almost finished with the Super Secret Test Knit project.  I've also gotten past the heel of the second vanilla sock in One Twisted Tree "Frozen Forest of Dean" yarn.  The Nightshift Shawl is coming along and I cast on Goldfish Memories by Casapinka.
We have a new male goat who is adorable and are hoping to hatch some eggs in our incubator. Also, I waited for 3.5 hours to buy chicken. 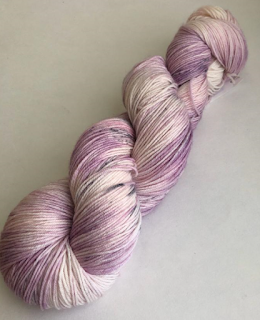 Stay Out of the Forest by Jennifer Lassonde

Other fluff for your rabbit hole:
Bags from Bede Sisters
Yarn from Blueberry Chick Yarn

Where to Find Me: BlueberryChick on RavelryBedeSisters on Instagram  Facebook Email me at bedesisters@gmail.com
Posted by Kay at 12:25 PM

Kay
I'm a homeschooling mom, knitter, spinner and owner of Bede Sisters project bags and BlueberryChickYarn. I have an ever-patient husband, who indulges my hobbies and lets me decorate the house anyway I want. I call him my sherpa; he carries my stuff and he doesn't let me get lost. Yep, it's a pretty good life.